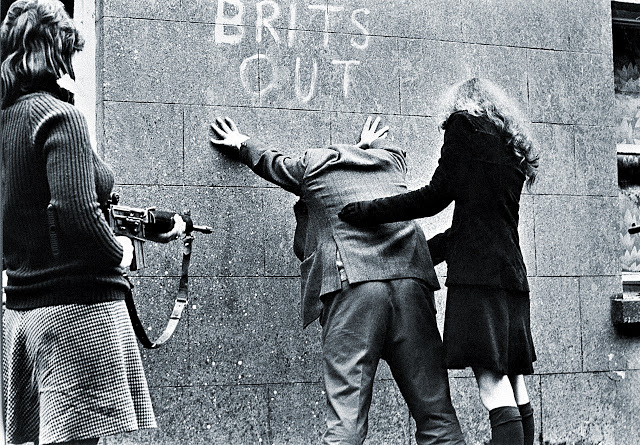 On Women and Armed Struggle

“When the multitude today moults, roars like the ocean, and is ready to die, the Commune will rise again. We will return multitude without number, we will come by all roads. We will come shaking hands, death will carry the banner. The black flag veil of blood and purple will blossom under the flaming sky.

To fight. To fight is something that every woman experiences throughout her life, in one way or another, the condemnation of patriarchy and capitalism, points out to us, as an objective for abuse, oppression and punishment. There is no escape route, our condition and body, the years and centuries in which we have been classified as objects, mark life and the way for all of us.

The resistance to this slavery is historical and millenary, and in this world there is not a woman who has not felt the weight of sexism in her being. For this reason, I dare say, every woman has experienced times of struggle and resistance. Sometimes unconsciously, sometimes making decisions, sometimes alone or with the support of others, sometimes with fear and sometimes determined and full of courage.

In the old Natural Society, women were the center of life. Thus being the role that influenced the clan with wisdom and advice, with protection and care. She had the gift of care and the knowledge to heal and safeguard family and close members. The man banished the woman, annihilating her autonomy, stealing her knowledge and imposing force and authority, the man shaped the stigmatization and slavery of the woman in body and soul, without giving space to the free relationship between human beings. Women’s lives have been condemned to the present day. The development of history has perpetuated this condition, and the oppression of women is a problem that crosses borders, does not understand one of colors or religions, transcends ages and cultures. That is why unity and action to confront this immense enemy will be the necessary tools to be victorious in this struggle.

Every woman receives double oppression, for being a woman and its added characteristics. Being black, working-class, fat, sick, old, foreign, single mother, homosexual, widow… The bourgeois and capitalist society will look for any definition to make our oppression more extensive and incessant. I am one of those who believe that from the moment that oppression exists, there is resistance. Precisely, this I consider to be a characteristic of women, to resist. But resistance is not enough if it is not organized in an active, constant and committed way. We can never dream of being free, when there are other women in the world who remain prisoners of their husbands, their children, of religions that annihilate them as human beings and put a price on their lives, while prisons are filled with poor women, while women continue to be enslaved with labor sentences, patronized by the bourgeois and capitalist medical system, forced to desire a life that we never choose and fit into stereotypes of femininity, which only make us more submissive to men and the system.

There have always been women who organized and conspired against power, although perhaps they could not be visible. There were always those who tried to confront and destroy capitalism and its allies. In these attempts at freedom, women organized themselves, sometimes together with their comrades and sometimes in autonomous structures. Sexism also emerges among our comrades, that is why the non-mixed, autonomous structures, spaces of struggle created by and for women, have become at the international level the indispensable tool of combat to advance and create bonds of solidarity and coordinated action in all parts of the world.  If the women of Chiapas, Mexico, Indonesia, Russia, those of the Spanish civil war, Kurdistan, the Paris Commune, etc. had not organized among themselves, the history of resistance would be different. In the Zapatistas, the CNT-FAI Militia, the anarchists of Russia, the women of the resistance in Palestine, the indigens in Mexico and the Mapuches, the women from PKK (Party of the Workers of Kurdistan), women in informal way organized, we find our referents for the present and to be able to speak about the importance of the armed struggle and the role of women in this war, called life. Without forgetting that one of the main objectives of our struggle is the struggle for a free and dignified life.

What good is life if it cannot be lived immersed in our own decisions? At any time in history, the most precious value, self-defense, happens and flourishes. Not as an abstract concept, but as part of the survival and defence of collective life, which encompasses nature, territory, the power to define ourselves and the construction of a future for future generations.

On the path of struggle against state and authority, repression and punishment of all ages, women took giant steps to defend free, happy life, and I can say that to this day, the organization among us and the firm decision to fight does honor to those who fell for freedom. They became hope for those of us who are neither dead, nor do we intend to surrender. The liberation of women means the liberation of society, the role that we provide marks daily life in any corner of this world, so that the destruction of the culture of “sexual-object,” commodity and slave, will take a further step not only women, but society immersed in capitalism.

And this is when the need to take up arms arises as a logical and necessary step on the road to our liberation. By taking up arms, I mean taking up arms taking into account the characteristics and possibilities of home territory. This struggle is aimed at building structures outside the states, that is why it is an internationalist struggle. All those women who prepared for social war, the women in the mountains of Kurdistan, those who join the Women’s Defense Units YPJ in the liberated territory of Rojava, the Mapuches who learned from childhood to shoot and build barricades, the Zapatistas who carry their rifles defending towns and mountains, those who learn how to make devices and explosives in any city to attack peaceful European societies, those who clandestinely learn how to use a gun to rob banks and defend themselves against police abuses, those who teach other colleagues how to use AK-47. Our own defense and how we organize ourselves is completely out of the logic and morals of how men do it. Our bases and foundations come from the historical and ancestral traditions based on communalism, free living, horizontal relationships and the firm and strong conviction to liberate every woman, every girl, old woman and teenager. For these reasons, if there is something special that characterizes us is the solidarity and recognition of the same enemy. If there is one thing that all those who support the armed struggles have in common, it is the strength and courage that we develop from the moment we are born, being able to build our own strategies and tools for life and struggle, which, after all, is the same. We do not need the protection or the paternalism of our comrades, we organize ourselves autonomous to them, understanding that paths by the same objective.

Our way of understanding our steps begins with ourselves and our decisions. It will never be more important to take up a weapon if our hearts and minds are not accompanied by a process of change. A process of change aimed at building us as revolutionary women, understanding the influence that capitalism has had on us and going deep into our personalities to change patriarchal and individualistic behaviors. To be aware, that the most important struggle must be within us, and with our actions we can recognize our value that pushes us to always walk forward and not to reproduce systemic attitudes with other women.

This is our history, the armed struggle, it is legitimate and part of our path because this is how the development of the oppressors and the oppressed takes place. We have the strong conviction that it is in the internationalist support and the use of self-defense that we can get to participate and contribute to other women’s struggles, everywhere in this world.

There is no history without bloodshed, no revolts without the costly price of the death of women comrades, jail sentences or escapes into hiding. To lose only one of us is to pay a very high price. In this way, historical memory influences women’s movements around the world, and is an indispensable part of the history of each of us.

Thus the memory of the acts of those who have fallen for freedom or of those who are or were locked up in the prisons of capitalism, is the gasoline that nourishes our desires to see societies and totalitarian systems burn.

In ethnic and cultural diversity, we take refuge to extend local struggles against patriarchy and make them global. From this mixture, a strong front was born, of defense for dignity and free life for all of us. Joining other partners in their struggles, understanding them as common steps to defeat the enemy, gives us courage, and takes away the fear of dying far from where we were born. It is not where we were born that leads us to freedom, what leads us to freedom is to understand the struggle at the international level, understanding that each territory deserves to be liberated. If we opt for the armed struggle to defend ourselves as women, this means that we do not accept or want national borders. The self-determination of oppressed peoples is part of the processes of social insurrection, where we participate in solidarity with our sisters, defending oppressed cultures. The annihilation of societies and cultures, languages and traditions that do not enter into capitalist traditions, have always been part of the struggle for the emancipation of the people, led, though not always visible, by women.

The concept of self-defense has always belonged to the popular classes, to the oppressed, to whom we have had to respond to the blows of repression. That is why history gives us our side of self-defense as an indispensable part of our lives. We have not known any other way of living, so do not accept that opportunists take over its meaning and the sentimental content that self-defense has for us.

And it is there, where the popular revolts organized by the rebel sectors are part of the processes in which the participation of women has been extremely important to set benchmarks, act as liberating vanguard and lead the people to the path of liberation in a horizontal and collective manner. The armed struggle, in itself, is the beginning for the construction of a free and community life. Resuscitate and incorporate into our struggle, guerrilla tactics, organize ourselves in a structured, horizontal and communal way, adopt militia tactics, document ourselves politically and ideologically, organize training groups in the territories in which it is possible, etc… will be more steps for an international struggle. To build forts of defense in different parts and contexts, having as tools the solidarity and the exchange of analysis and tactics with the other distant comrades.

The struggle for women’s liberation will be with us at the front or it won’t be. In the same way that until we get a strong organization and cooperation with all organized women’s groups, we will not be able to reach all those that deserve to be free. We fight for an international women’s movement, for each one that fights, makes the others freer.

“No party can call itself revolutionary, if it fails to prepare for armed struggle. This is the way most effectively confront the reaccionaries in every step of the revolutionary process. Any disregard for this factor can only lead to missed revolutionary opportunities. 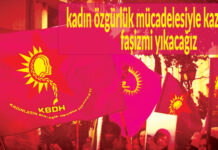