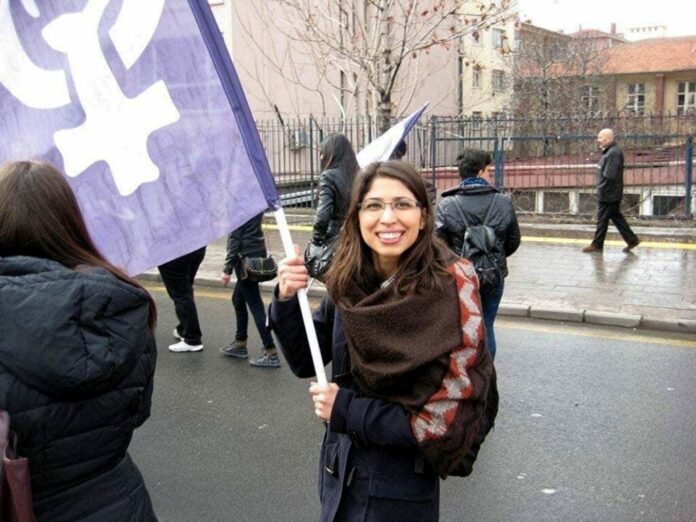 Every revolution undoubtedly creates a chaos. The existing order breaks, limits of the cosmos shred. The quality of a communist revolution lies in its ability to carry on this process of shredding and breaking. For this reason, every revolutionary communard is an immense implementer of the chaos, the complexity, the fight and the war.

One day, they conceal the chaos inside a cell in their hearts and they become and make revolutionary in that cell. One day they open the doors of their hearts wide open and search for the reality, make chaos the reality, act and become the actant.

It is the second anniversary of immartalization of Comrade Ceren, who fell fighting the occupant Turkish Army on the Serekaniye – Til Temir frontline. Comrade Ceren was undoubtedly a revolutionary communard who was on the assault in every term to shred the boundaries of the existing oeder, who inscribed revolution on to her heart, integrated with other hearts, never refrained from seeking the truth and one who acted upon it and who kept looking while acting.

What made Özge Ceren, what made Ceren walk toward death for millions of people who she didn’t know, was the power within that hearth, the power of freedom.

Ceren was born as a child of a proletarian family in Mugla, a city in western Turkey. Feom very early ages, she started working in the fields, olive gardens, vineyards. Her education life which led to medical studies was paved by her elbow grease.

During chats, she would always tell how she was impressed by agricultural workers who were being chocked by their own hands under the domination of exploitation. Also during chats, Ceren would explain how patriarchy that she felt at home, in school made her feel and how it made her forced into organising and fighting.

What made her full of the power or freedom and the truth of the commune, what revolutionised her heart and organised it like a cell, was undoubtedly her will to not give in and fight against the paradoxes that made her who she was.

Ceren had already paved the streets or Ankara with that will as soon as she started her studies at the university, as Özge. It is possible to find traces of that will in every area of active legitimate struggle; from chain protests to occupations, from road blockings to barricade resistance.

However, a subject is a revolutionary subject as long as she is able to transcend its boundaries and discomfiture the objective conditions she finds herself in. Ceren executed a revolutionariness that fits exactly in this norm. During the days when the November Breakthrough was being discussed, Ceren did not “curl her lip” or “turn her nose”. What she saw was a chain of possibilities and a ground on which she could act on behalf of the truth, with the likes of her, and open her revolutionary cell heart wide open. Surely, her desire to continue the fight as a “committed revolutionary” instead of an “appointed doctor” so she gave up on the job what the State “appointed” her to and did nit listen the advices against it from her surrounding.

Therefore, she could no longer remain Özge. Özge was of course a revolutionary that inscribed her name on the streets of Ankara. If you don’t believe it, go ask it, to every pavement brick on Yüksel and Konur streets which are under police blockade and sharp lookout. They are the witnesses to Özge’s revolutionariness. They bear witness to how Özge and her comrades defeated immense blockades. Nevertheless, Özge’s body and position was not sufficient for finding he alikes and act on behalf of the truth. Whose was sufficient anyway? One of the important points that made Özge Ceren Was her will to complement that shortcoming. Ceren’s first stop as a committed revolutionary would be Istanbul. It was a time when attacks in Mersin, Adana, Ames, Suruç had ocurred. At this historical time, she was one of those who had positioned herself properly. For Ceren to turn into a revolutionary fighter, basic weapon knowledge and illegality training would be enough.

In December 2015, when all corners of Turkey and Kurdistan were being ravaged by AKP regime via ISIS, Ceren among those who had the courage to stuff her anger into a bomb and destroy a jihadist headquarters. She was no longer Özge, it was already open and clear. She had become Ceren Güneş. Soon after this bravery, she passed on to Rojava and joined the Battle for Manbij. Staying behind the frontlines for a short while, she then took part in the battles for Tabqa and Raqqa with Internationalist Freedom Battalion (IFB).

She fought both as a fighter and a commander in the Battles of Raqqa during which IFB showed great resistance. After this experience she became a leader who passed her experience on to her comrades, who taught and learned, and who forged in the battles.

She took on prominent responsibilities during the April-May Leap in 2017, which was dedicated to the Fours and which was thwarted and as a result of which our Movement suffered losses at senior levels. While some pulled the surrender flags, while some took to the roads of Europe, while some put on the mask of revolution with positional and livelihood concerns; she was one of those who rolled up their sleeves towards establishing a new revolutionariness. Upon this, she would also be the one to face the direct and indirect attacks of the purgists. What made her heart revolutionary and what strengthened her resilience were the same thing. This was the source of the attitude which didn’t step back despite the thunderstorms, period.

That resilience, that will, made Ceren a founding cadre during the re-founding process of the movement, putting together all experiences and qualities of the short lived life. Ceren left important marks in both Rojava and Turkey fields within as short time as one year. She moved back and forth along the Serekaniye-Til Temir frontline both at the preparation phase and during the battle. She put her elbow grease in every process from founding of the Organisation to organizing the daily life, to politisation of the founding process. Revolutionaries, fighters, anarchists, ecologists, feminists, coming from all over the world remember Ceren with her smile, her fight and as an honest internationalist communard. Ceren was sleeping four or five hours a day. She would see more than that as a luxury. She was not working from a desk. But she never compromised against those working from desks. She held both, the pen and the gun.

Ceren left the revolutionary communards a revolutionariness that as a legacy will always be taken as an example and carried to the future. She had dreams and utopias. Instead of imagining it as a dream, she practiced a life that lived it. With Ceren’s relentless practice of fight and immortal body, Özge’s heart thar was forged much like a cell, comes out at all the revolutionaries. Ceren is not only Ceren anymore. Ceren, with her memory and legacy, is a leader of the armed struggle against patriarchal capitalist system, oppression, and starvation in the revolution in this geography. As we said before: Youth of Turkeywill materialise Ceren’s dreams, realise them, and just like Ceren with the secret revolution hidden in their hearts, will shake this fusty authority’s foundation and smash it!

Every Heart Stands as a Revolutionary Cell! We will prevail! 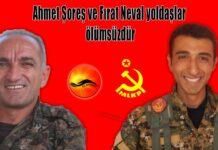 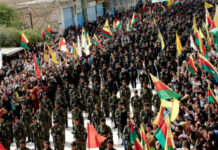 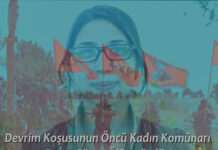